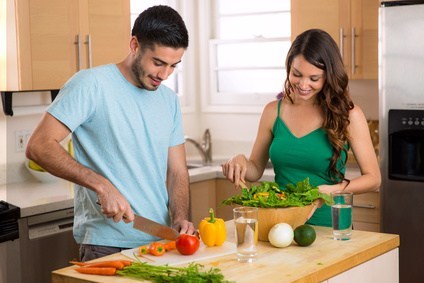 When my favorite aunt was in school learning to be a nurse, most of the women in her class expected to work a little while after finishing school, then get married, quit working and have children. By the time I went to nursing school, most of the students planned to make a lasting career of their profession.

In 1905 only 6% of women were in the workplace and most of those women considered their position temporary to make money while their husband was sick or disabled. Today 60% of married women are in the workforce and the majority of them are permanently employed. Compare that with the fact that just 15% more married men are employed and you can see that there has been a tremendous change.

Women’s experience in relationships has changed since they have gone from staying at home to being in the workplace. One big shift has been in the kind of man they want in their life. A hundred years ago when women stayed at home they wanted a strong man with a little bit of sensitivity. Hopefully he was able to be at least a tiny bit romantic. Oh, and by the way, the man’s orgasm was the only one that was of any great importance.

Now women are looking for a strong, sensitive man who can be a partner and share life. But it’s a two way street. Not so long ago a woman was expected to put the man in charge and then try to get what she wanted by manipulating him. Now she needs to be stronger and more assertive so they can be equal, genuine partners. It’s just as hard to learn to stand up for yourself effectively as a woman as it is to develop your sensitive side as a man.

You may not know it but, if you are married or in a committed relationship, you are in what I call “The New Relationship.” Both men and women have to adjust to the new power dynamics of relationships now that most women work outside the home and continue to work even after having children. This transformation is the root cause of many current relationship challenges.

A lot of women have said to me, “When we moved in together, he pitched in and helped with the housework. Everything seemed so promising and then somehow we ended up in my parents’ marriage. Now I have a full time job and do almost all of the work at home.”

One of the biggest complaints that women have is that men don’t share the workload at home and with the children. And it’s not as much about her being overworked as it is about his not being a real partner. The bottom line is that they both have to see the relationship in a new light.

Susan and Paul came in to see me because they were very close to divorce and since they had children they wanted to make sure they were making the right decision. Both of them had been working in retail management, one at a clothing store and the other at a grocery store.

They said when they first got together they had a lot of fun. They liked a lot of the same things and each couldn’t help but laugh a little when they told me they enjoyed each other’s sense of humor.

The challenges came when they had children, because Susan began to realize that she was taking on the role of supermom. She said when she got home from work she’d often find Paul by following the trail of clothes on the floor. She didn’t like it, but she handled it by thinking that both of them were busy and wasn’t that her job anyway?

However, things started falling apart when Paul lost his job and Susan started putting in extra hours at work to make up for the loss of income. She’d always thought that if he were at home more and didn’t work so hard, he’d pick up after himself. Unfortunately he didn’t change.

He did do a little bit more with the kids by taking them to school and picking them up. But after Paul was off work for more than a year and she still had to be supermom, Susan was ready to explode. Their fights became more and more intense and they were getting more and more distant. Then the day came when in the middle of one of their fights they began speaking about divorce. That’s when they showed up at my office.

When a couple comes in with these problems, often the first thing I have to get past is the insults from his being a lazy tyrant to her being a nagging, well, to her being a nag. This was pretty much how Susan and Paul were framing the conflict and it was my job to get them to see the difference between the old relationship that their parents had and the one they had in the present.

I had each one describe what life was like at home when they were growing up. Paul talked about the usual distant father who disappeared to work and came home late. Susan had pretty much the same experience growing up. Her mother worked part-time in retail sales and did all the housework and childcare. Her father was a regional manager who was constantly putting out fires at work.

Therapy proceeded as it often does when couples have at least some level of deposits to their Love Bank Account. Initially, because they were in a therapy session and I managed their interaction, each one had a safe place to air their grievances without it getting out of hand and hurtful. Then they each learned to talk about their upset and hurt without making the argument worse.

It was then that Susan could see how she hadn’t been asserting herself and taking care of her needs in a way that he could hear her. She had been doing what her mother used to do which was just take care of everything and assume the supermom role.

Paul learned that Susan was often doing things for him without him recognizing how women take care of relationships. Both were beginning to fill their love back account again and things were going smoother at home. Paul started doing more of the chores at home he said “At least until I can get a good job again.”

Under some circumstances men do become the housekeepers and when he does he’s acting more like a partner he’s not becoming a woman. They were on the right track and divorce had been taken off the table.

Now the real challenge emerged. How do you become real partners and share the work at home? When I asked them what they were going to do the first response was to draw up a big schedule and divide up housekeeping and childcare duties in detail.

I told them that this was almost guaranteed to be a disaster. I’ve experienced family conferences as a child and the one thing I’ve noticed is that the grand plans and schedules rarely last more than a couple of days, if that long. Then someone, usually the mother, takes the role of supervisor and tries to get everyone to do what they’re supposed to do. The result is more squabbling and arguing than before and even more hurt feelings.

I’d already seen how Susan and Paul could get into top dog and underdog positions in their arguments about housekeeping. She would attack and he would defend himself. The longer the argument went on, the more they each got stuck in their position. The first step was showing them how to deal with an issue and not get stuck in a painful emotional wrestling match. Then they needed to learn how to be true partners and handle these issues together.

The secret is now at your fingertips. I wrote these valuable insights based on my experience helping thousands of couples discover new, more successful ways of being together. Yes, relationships are a challenge, but so is living alone.  Relationships are an opportunity to grow and are ultimately more fulfilling than any other experience you can have in life.